Original post is beneath the updates. We will be updating this story to keep you informed of all the latest developments.

A reminder national media: when reporting about the hurricane, that land mass between Alabama and Louisiana is called Mississippi, since y’all seem to forget 😒

The Federal Emergency Management Agency offers tips for safety in the midst of the hurricane conditions. The following is from a FEMA release:

Ida made a direct hit on Port Fourchon, a critical hub for the U.S. oil industry. According to its website, Port Fourchon plays a strategic role in furnishing the U.S. with about 18% of its entire oil supply. The port has lots of tank farms; oil spills will be a hazard. pic.twitter.com/Nf9WR8KId0

AT&T says they are waiving overage charges to provide unlimited talk, text, and data for postpaid and prepaid customers due to Hurricane Ida. The waiver affects customers with billing addresses in 388 zip codes across Louisiana and Mississippi from August 29 through September 4.

Rain bands from Hurricane Ida are beginning to move over the Pine Belt. A tornado watch is in effect for Lamar, Jefferson Davis, Lawrence, Jones, Covington, and Marion counties.

Linemen can be seen throughout the state, staging to be ready to restore power in areas affected by the storm.

These linemen from Cleveland, TN made a fuel stop on I-59 in Pearl River County. They are traveling south to @TheCityofBR Baton Rouge, Louisiana. They will be assisting in power restoration once Hurricane Ida passes. Thank you and safe travels. pic.twitter.com/guMXSstH5S

Tornado warnings have begun on the coast for Harrison, Hancock and Pearl River Counties.

President Joe Biden emphasized in a press conference that Ida will be devastating and life threatening.

“Please all you people in Mississippi and Louisiana, take precautions, treat this very seriously. The whole government is ready to get to work,” he said. “We’re here to help the Gulf Coast region get through this as long as it takes.”

Louisiana Governor John Bel Edwards holds a press conference to update and reminds viewers that the storm is rapidly changing, and to please stay updated. Please don’t approach debris, downed powerlines, or standing water, they say. If you lose electricity and you decide to use a generator, make sure it is not inside, but somewhere that it is well ventilated.

Edwards says he expects to see extreme damage in the areas where the storm has hit, but that a response may not be feasible until morning.

No Tier One hospitals have been evacuated in Louisiana, he said. Four mental hospitals, 22 nursing homes, 18 assisted living facilities have been.

Time is running out to prepare. Be sure to have enough supplies to last for at least 72 hours. #idahurricane

If you need to find a shelter:

Reports from the Gulf Coast say the surge is down a little but the wind has definitely picked up. Gulfport Police Department says that once sustained winds hit 45 miles per hour, officers will shelter in place and won’t respond to routine calls unless there is an extreme emergency.

“Please respect the curfew and do not attempt to drive through flooded streets,” Gulfport PD posted on Facebook. “This will prevent emergency personnel from having to respond to unnecessary traffic issues.”

A closer view of 1-minute Mesoscale Sector #GOES16/#GOESeast Visible images revealed the presence of low-level #mesovortices within the eye of Category 4 Hurricane #Ida as it approached the coast of Louisiana (making landfall at 1655 UTC): https://t.co/StBIJLaL81 #LAwx pic.twitter.com/bzHSJOQbxq

Mississippi Emergency Management Agency Director Stephen McCraney says now’s the time to be weather aware, make sure you have multiple ways to receive warnings. Calls Ida “a record breaking hurricane,” and says the state has learned a lot of lessons since Katrina and is ready for Ida. Check MSEMA.org throughout the storm for updates, he says.

“Please stay off the roads unless it’s absolutely necessary,” the warning reads. “We expect treehs down and power outages throughout the county for the next few days.”

Rankin County road crews, EOC employees, deputies, and others will be working to get the roads open as quickly as possible, the release said.

Another storm tip: get cash. When power is out, credit cards and debit cards won’t work.

Hurricane Ida, which has national attention as it begins to wreak havoc on Louisiana and South Mississippi, just made landfall on the Louisiana coast as a Category 4 storm.

Reports from NOAA and Air Force Reserve Hurricane Hunter aircraft
indicated that Hurricane Ida has winds of 150 mph with stronger gusts, and hit first at Port Fourchon. It will continue to move inland Sunday, with conditions deteriorating across all of Southeast Louisiana and into Mississippi.

Swift Water Rescue teams from the Mississippi Urban Search and Rescue Task Force have arrived in staging. Please continue to monitor your local weather forecast and follow any recommendations or orders given by your local public safety officials. pic.twitter.com/OOCKd0FTJw

Governor Tate Reeves has declared a state of emergency as Ida approaches, and President Joe Biden approved emergency declarations for both Mississippi and Louisiana.

In Mississippi, warnings are in effect, and began for many areas on Saturday. The NWS for New Orleans and Baton Rouge is warning that significant, life threatening impacts will occur because of the storm surge, damaging winds, heavy rainfall, and isolated tornadoes.

In the Southwestern part of the Magnolia State, officials said there is a significnt threat of winds up to 75 miles per hour, considerable and widespread tree and powerline damage, structural damage, power outages for up to two weeks, and some roads may be impassable for days.

Across most of the central part of the state, there is an elevated threat of winds up to 65 miles an hour, widespread downed trees and power lines, some structural damage, blocked roads, and power outages that could last several days. Central Mississippi should expect 4 to 8 inches of rain with isolated maximum amounts of 12 inches, tonight through Monday night.

Entergy Mississippi will be expecting significant damage to our system in South MS, the Jackson Metropolitan area as well as threatening weather into North MS. We have acquired a large contingency or resources to respond but please be prepared for extended outages.

As you head toward the northern part of the state, winds could be up to 45 miles per hour with downed trees and power lines, a few roads blocked, and isolated power outages.

Authorities say a storm surge from 7-11 feet is possible in Hancock and Harrison counties, and 4-7 feet in Jackson County on the coast. The NWS says the deepest flooding will be along the immediate coast near and to the east of the landfall location, and the surge will be accompanied by large and dangerous waves. Surge-related flooding depends on the timing of the surge and the tide, and can vary greatly over short distances.

Stunning video taken from inside the eye of #Ida this morning by the NESDIS Ocean Winds Research team during a flight on the @NOAA_HurrHunter P3 aircraft @NOAASatellites pic.twitter.com/sjt970Yeiq 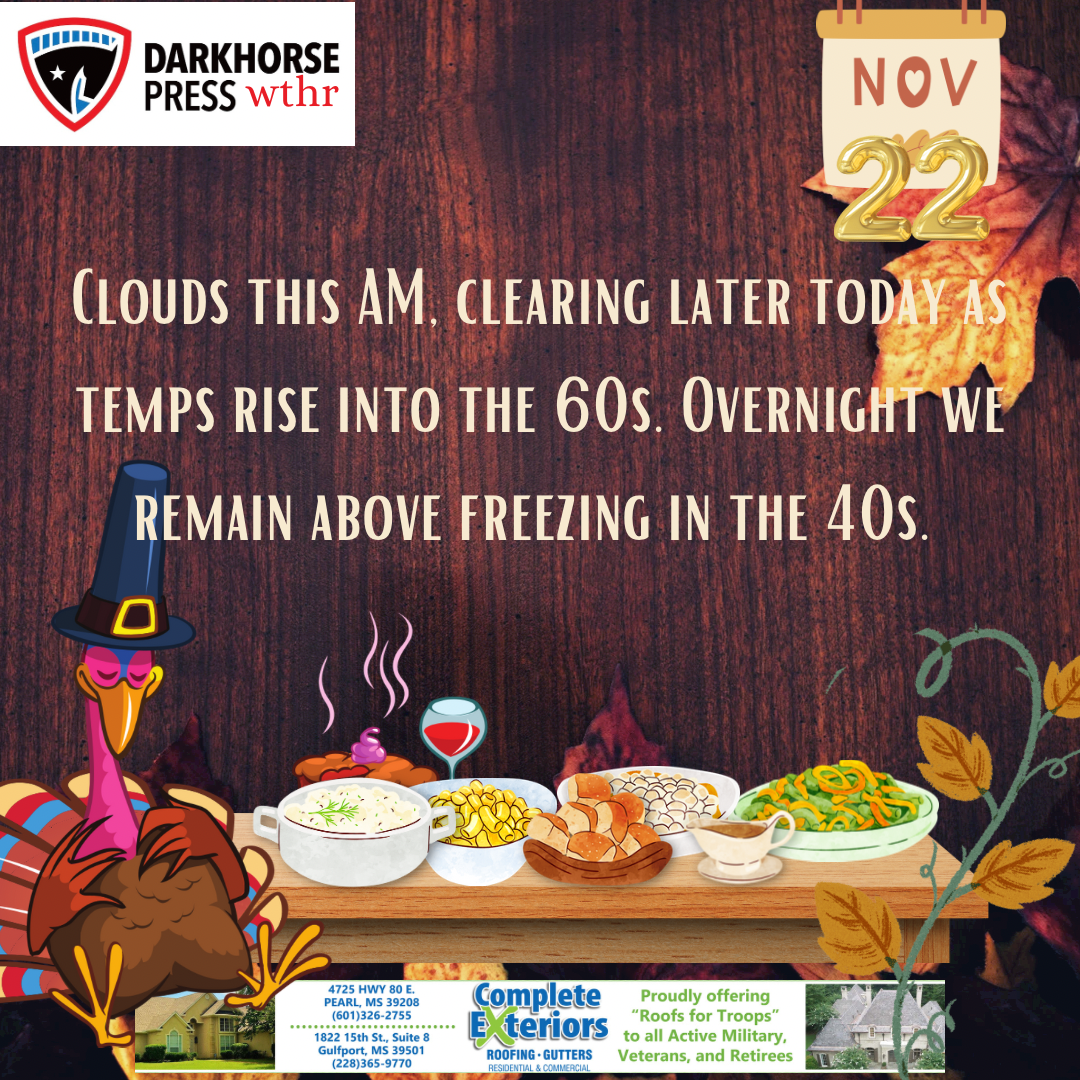 Tuesday weather: highs in the 60s

Some slight rain chances remain possible through mid-morning before clouds gradually clear into the afternoon. Highs will warm closer to normal into the low to 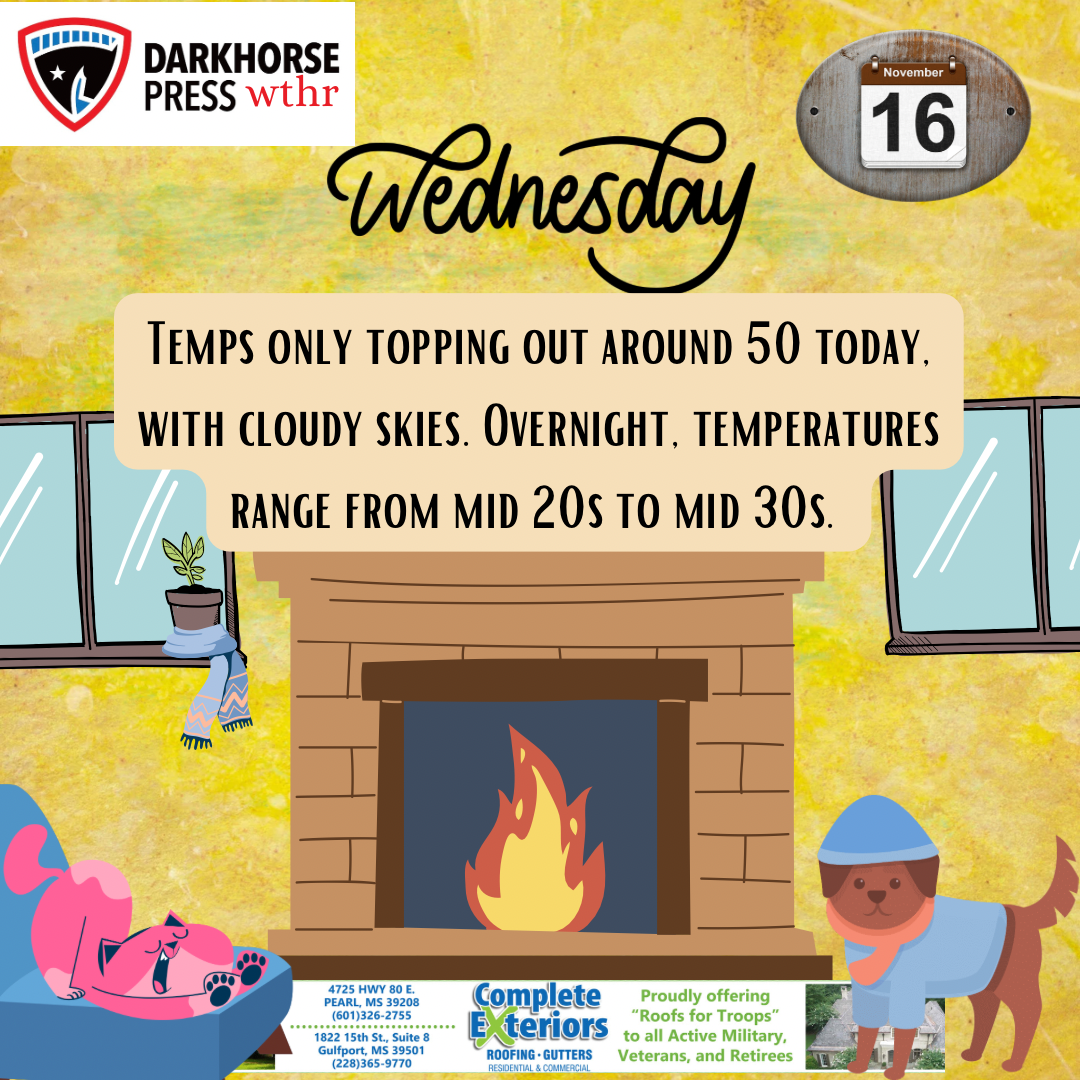 A cold start this morning gives way to a mostly cloudy day with highs only topping out around 50. Tonight temps are going to drop 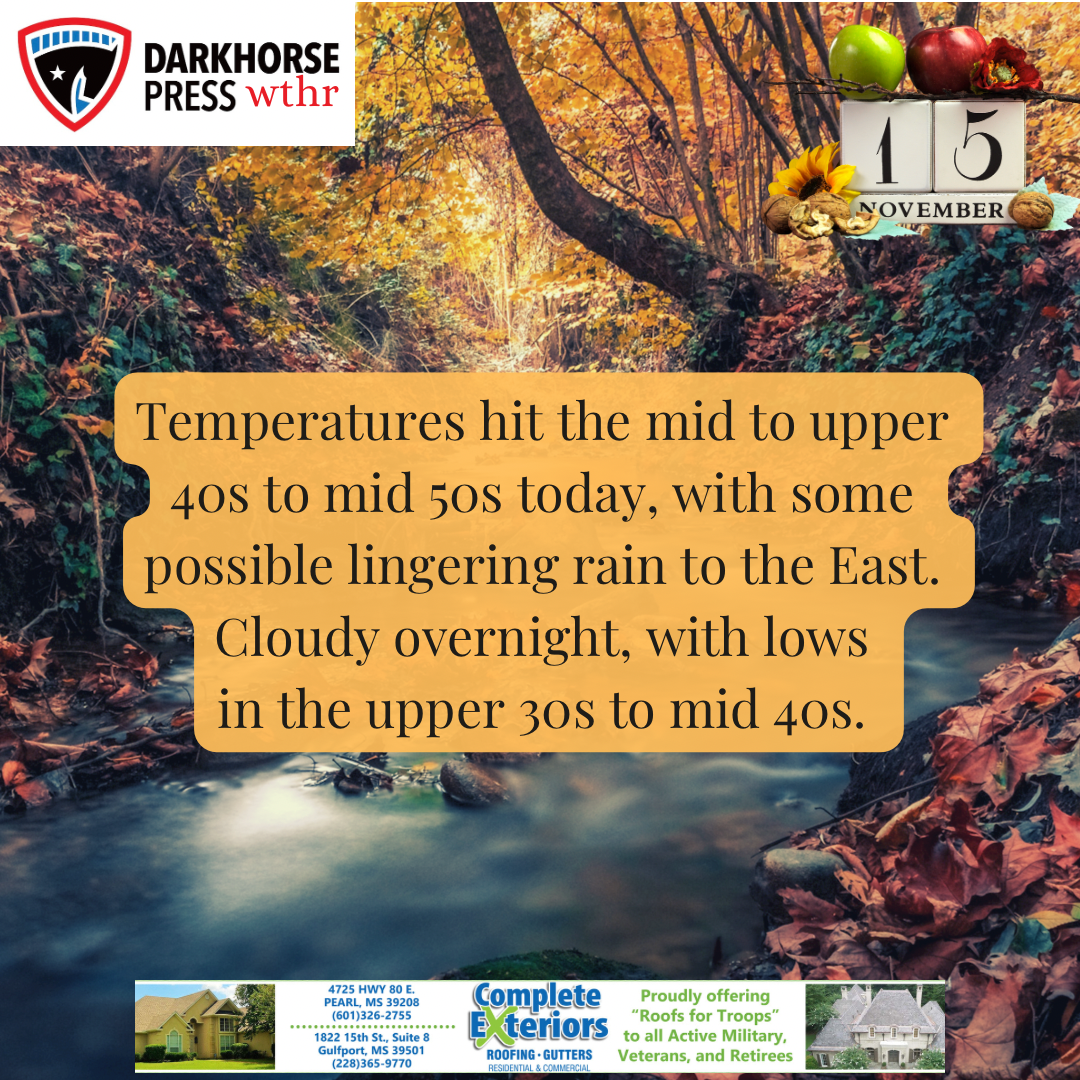 We’ll possibly see some lingering showers to the East today as the rain finishes moving out. Otherwise, cloudy skies are expected with afternoon high temperatures 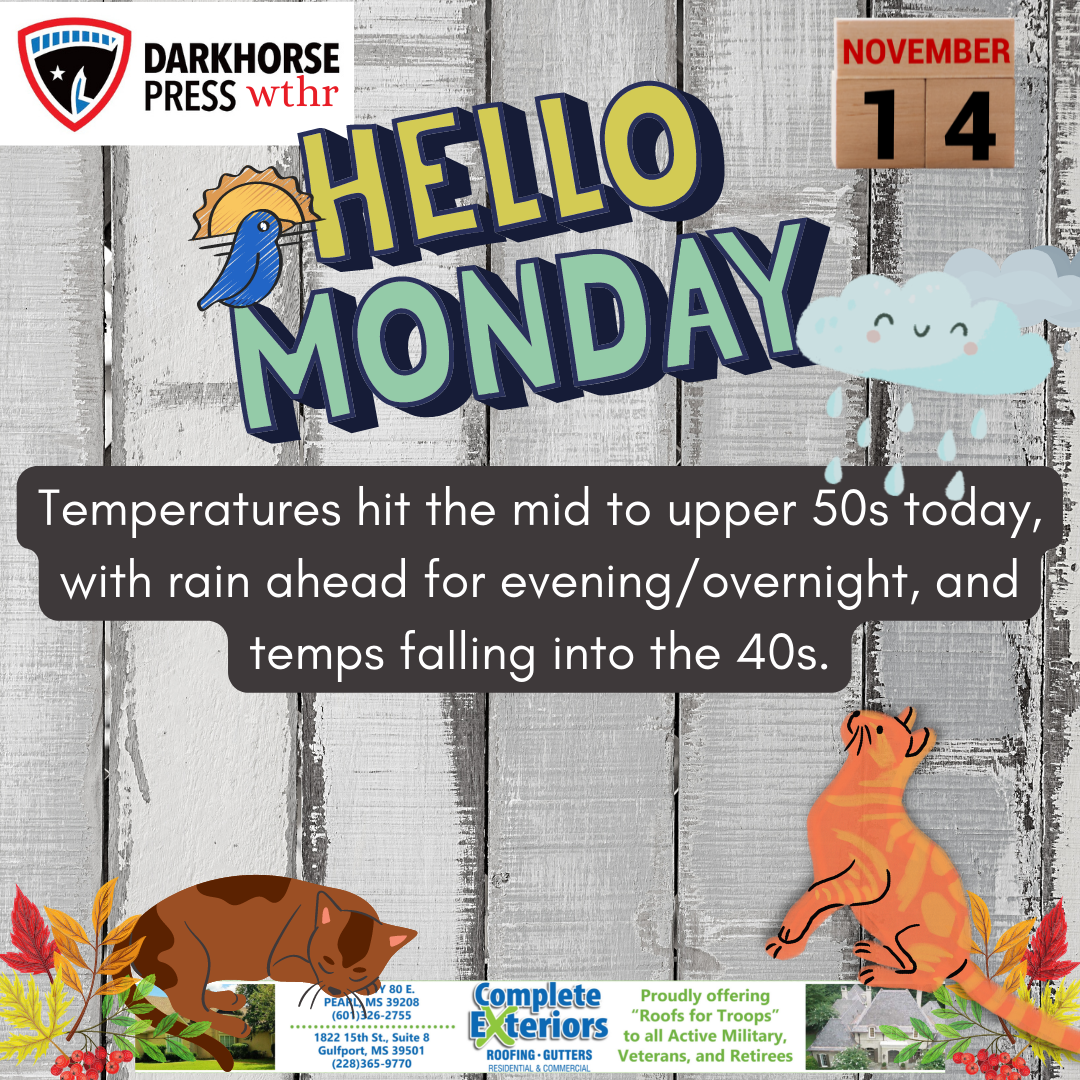 After a chilly start to the morning, high temperatures today will reach the mid 50s (northwest) to the lower 60s (southeast). Rain will become widespread 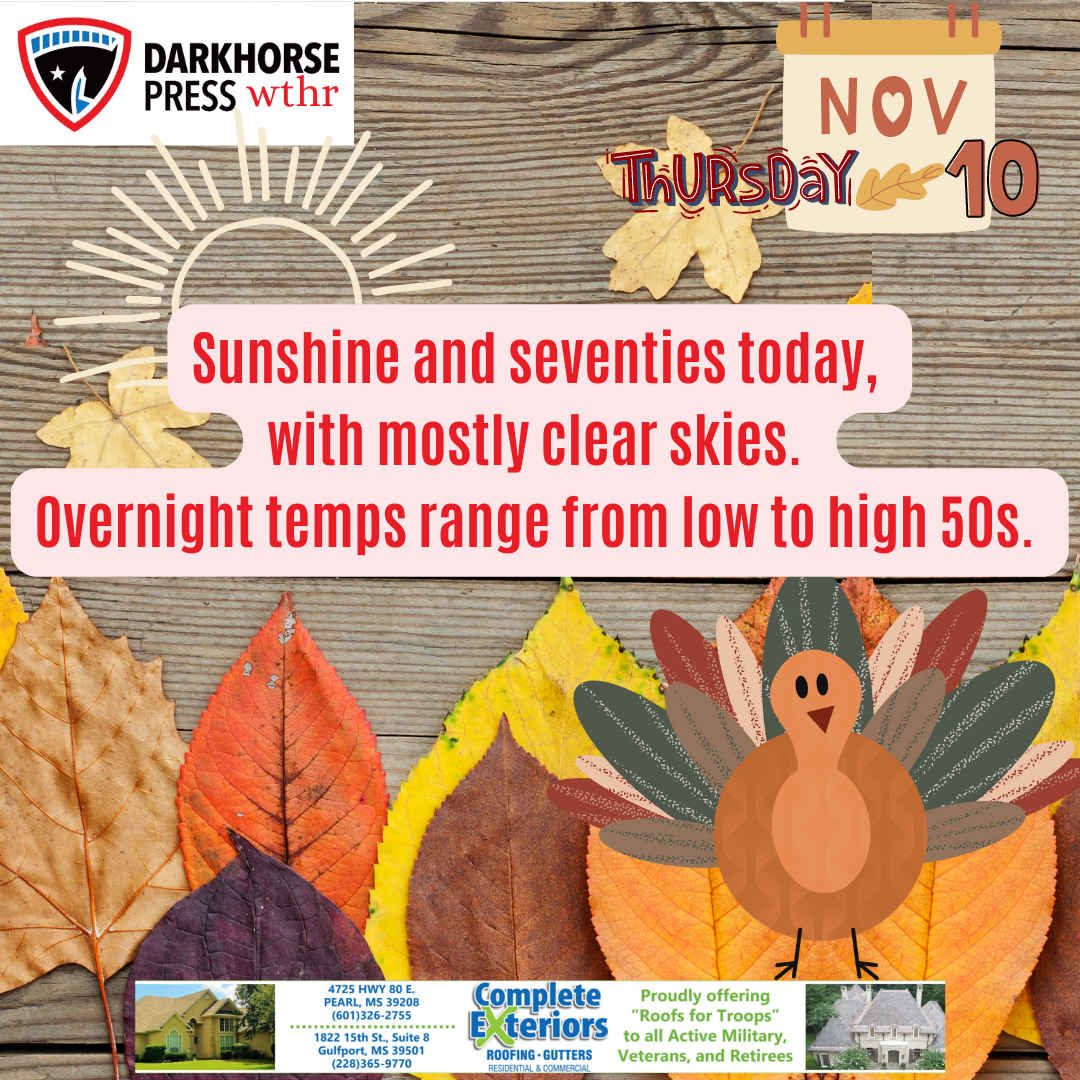 Today we’ll see sunshine with some cloud coverage and cooler temps topping out in the 70s. Overnight temps will range from high 40s to high 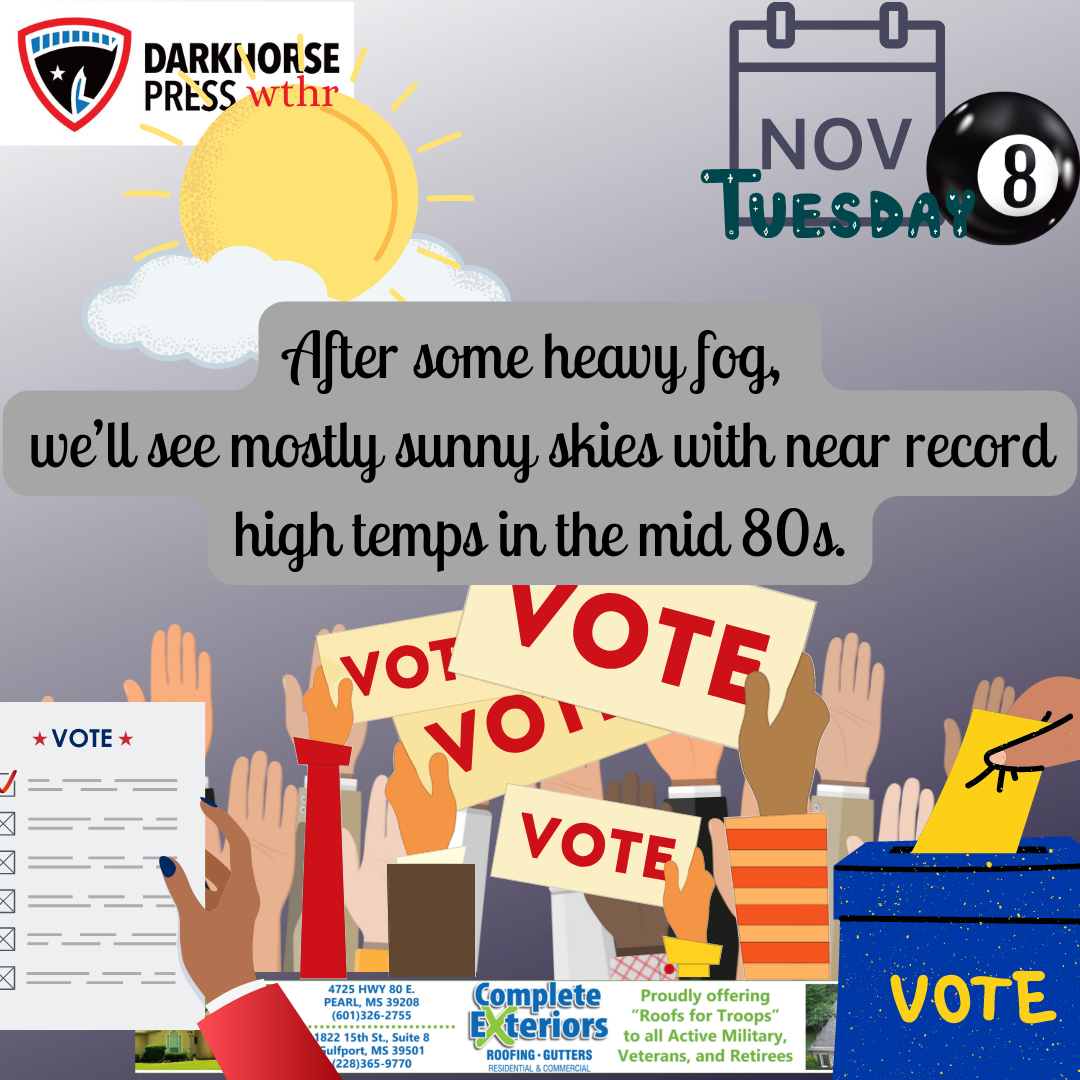 After some thick morning fog today, we’ll see mostly sunny skies with near record high temps for this time of year. Highs will reach the