On Memorial Day, this is for those who gave their lives to defend freedom… and came home

A few years ago, a few days before Memorial Day, a friend of a friend (she definitely wasn’t my friend, to be clear) said in front of me that there shouldn’t be such a thing as a veterans’ discount. “They aren’t special,” she said. “They knew what they were signing up for.”

Now let me say first that I know Memorial Day is a day dedicated to those who have lost their lives in battle. But I firmly believe there are those who see combat who lose their lives on the battlefield even if their bodies come home intact. 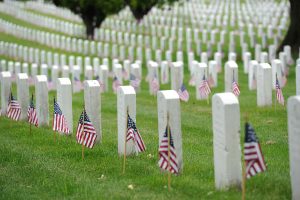 After that woman’s comments, at first I was infuriated. Then it dawned on me: She’s never been to that hell, and she’s never loved someone who has.

She’s never watched his eyes go to a far away place when she talks about something trivial because he’s thinking of the guys he called brothers blown away in front of his face. She’s never been awakened in the middle of the night by HIS nightmares. She’s never heard him sob through a drunken haze neither of them would ever admit to being there for that he’s nobody now because he’s a has-been — in his head, he’s no longer a part of anything that matters because THAT was a higher calling, and now he just has a desk job. She’s never had to think, “No wonder he can’t make small talk. NOTHING will ever matter as much as what’s going on in his head every day.”

She doesn’t know what it’s like to think about death as much as you think about life. She’s never had her heart smashed by a hero who is so broken that he can’t even make normal life and regular relationships make sense anymore. She’s never had to worry that this time he’s telling her how useless he feels, it might be the last time she hears his voice. She’s never had to worry about whether he’s coming back from a deployment. The guys that she dates have problems like car troubles and mean bosses and “Where am I going to find another reasonably-priced suit?” Not death, and war, and enemies that blend in with the rest of society, ones that are born with one mission: to kill him.

On the other hand, I’m sorry for her, because that also means she’s probably never known what its like to look into those eyes and see what courage looks like, and it’s not just the courage of the battle, it’s the courage to live life after it’s over.

Thank you is not enough of a word, Warfighters. We owe you more than we’ll ever be able to even understand, much less repay.
Happy Memorial Day, and God Bless America.

On Memorial Day, a five-year-old Pascagoula died after possibly downing at Flint Creek. Brooklyn Moore, the little girl, was unresponsive when she was pulled from